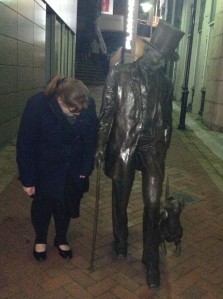 If you haven’t heard about me harp on about it yet, I went to Wellington (this one, not this one) last month. It’s taken all that time for me to be able to take a step back and start writing about it without dissolving into fits of giggles and nostalgia. That and I’m a little bit lazy. I’m compensating for the delay with sheer quantity. Over the next few entries, I’ll be writing about all the fantastic things I got up to in an attempt to give you a glimpse of Wellington that doesn’t involve that dude from The Voice. For the rest of the posts, take a look here.

Travelling on your own is a funny thing. It can be incredibly liberating, wandering the streets of a place that isn’t home, knowing that there’s no expectations as to what you’re going to do or how late you will be out. You’ve got all the room in the world to make your own way without worrying about how it might affect your reputation back home. It leaves plenty of room in your head for soaking up experiences and meditation on what you want from life. Basically, it can be pretty damn rad.

Conversely, it can be incredibly lonely, full of nights spent in and wandering between unfamiliar bars, stuck in a hotel room or a backpackers with a lottery of transients who know about as much about your destination as you do. Before you know it, you’re wishing for faraway friends, or at the very least someone with enough local knowledge that you could find a decent band to wash away your homesickness. Your days can be spent scouring the internet and whatever street press you can find for scant details on what might be happening outside of the usual tourist haunts, but even with the most accurate information, you can never tell if your experiments will fly or pull a spectacular Icarus routine.

On my trip to Wellington, I was lucky enough to have the perfect combination of solo ambling and time with new friends and acquaintances. From those I spent whole days with, to those who humoured me with fleeting chats in the bizarre space that is Boogie Wonderland, I was surrounded by ridiculously awesome people I was completely and utterly blessed to meet.

This post is dedicated to just some of the magnificent human beings who made Wellington Week so absolutely marvellous.

If it wasn’t for Anna, none of this ridiculousness would have occurred in the first place. Sure, I was really damn excited to see What We Do In The Shadows to begin with, but the marketing campaign that she devised and drove was more than the icing on the cake; it was fucking ART.

When Anna first got in touch, I was still sitting in shock at my computer, having won the TradeMe auction for an WWDITS artwork only a few hours earlier. There were a few emails back and forth over the following days, flitting across a few different threads: the joy I’d derived from interacting with the vampires through social media and the auction, the possibility of a personal handover of the artwork from Jemaine and Taika, or maybe I could come to the premiere, but how outrageous is that?

Before I knew it, I’d booked my leave and flights and was just about falling over myself with glee. It seems that Anna is not only a marketing and PR wizard, she is also remarkably good at dealing with insane Australians who are high on post-purchase euphoria.

Over the following weeks, Anna sent me information about the weather (“four layers” was the prescription in terms of wardrobe), made suggestions for accommodation and somehow wrangled me in for a brief TV stint in a story about the campaign. (Did I mention it was fucking ART?)

The initiation of my trip alone would have been enough, but I also had the pleasure of hanging out with her after the premiere and then again on the following Friday at the launch of her gentleman-friend’s exhibition in a venue that was so full of beautiful, stylish and awesome people it was unbelievable. (Daif is also incredibly rad.) Then we went and had Japanese and that was also brilliant. (Although I did discover that sake and I are probably never going to be friends.) After that, we walked through the city for a little while and she and Daif pointed out various locations from the film, adding even more sparkle to the places around me.

From start to finish, Anna was an incredible guide and phenomenal pal. I couldn’t have asked for a better introduction to the New Zealand capital, and its community of insanely clever people, than the one she provided. I still feel so incredibly honoured to have met her.

Note: Somehow, despite all the joy and fun I had hanging with Anna over the course of the week, I forgot to get a photo with her. This is because I am an idiot.

When it all suddenly became clear that I was actually going across the Tasman on this mad jaunt, Anna immediately offered to help me out with accommodation by way of sorting a couch surfing arrangement. Jane was the first name she threw at me, and she went on to be pretty much my guardian angel for the whole week.

My first connection with Jane was via Twitter. From there it was only a matter of days until I pulled up in a cab at her front door, fresh from the airport (and the cab driver charged an extra $100 on the fare by accident – OH HOW WE LAUGHED).

We got on like a house on fire, with hot topics including Dog on a Log (which I had somehow missed), the bizarre world that is Tinder, and the sharing of tunes from either side of the ditch (I offered up Citizen Kay and Brass Knuckle Brass Band, Fun Machine and Mikelangelo and the Black Sea Gentlemen; she introduced me to Beastwars and The Phoenix Foundation). She gave me a room, a bed, fed me, gave me transport advice, accompanied me to the premiere, kept me company, helped me do my hair, taught me things and convinced me to do things that I might have otherwise passed up for nerves. (I can now say I my lips have touched something that was also used by Michael Palin. Pretty fuckin’ cool.)

Jane didn’t just treat me like a friend. When I was hanging out with her and her daughter and their cat and her housemate, I felt like I was part of a family. The degree of hospitality shown to me took my breath away, and I still feel like I haven’t said thank you enough. (Thank you, thank you, thank you.)

I hope that I when I have guests in my house, I’m half as good a hostess as Jane was to me. She truly is one of the kindest hearts I know, and I’ll happily call her family any day of the week.

Okay, so I didn’t exactly get to know this guy beyond throwing money at him and a quick chat, but he certainly made an impression. I spent the better part of an hour watching him entertain those ambling along Cuba St on a Friday night, before I bailed him up to thank him for the pleasure.

We got chatting: I told him how the smell of fire twirling brought back happy memories of university friends, and complimented him on his incredible live looping guitar skills; he told me that he was planning on heading to Melbourne to meet up with his girlfriend and how that seemed to be a growing trend among the young artists of Wellington.

He showed me the way to The Rogue and Vagabond, a craft beer bar a few blocks off Cuba St with a bulldog on the logo and a mad gypsy band playing in the corner. It was very much my scene.

I would have stayed and harassed him a little longer, but the bar was pretty full and he was keen to do some writing, so I took down the address of his Facebook page and told him to get in touch when he got to Australia.

Sure, I knew Benjamin for an hour and a half at most, but he reminded me of friends back home, was remarkable company and brilliant entertainment, and he introduced me to a venue I am definitely going to have to revisit when I go back to Wellington, whenever that may be. It’s not much and it didn’t last long, but you’ve got to celebrate the little things sometimes.

I didn’t get to talk to this guy that long either, but man, what a champ.

Taika and I probably talked for a grand total of about 5 minutes across four or five occasions, but in each brief instance he had a big smile and was just a totally awesome dude. Even when I was babbling nonsense from excitement, a touch of post-hill-walking exhaustion and a good serve of shaken-brain-from-nearly-face-planting-onto-concrete-on-said-walk-to-the-airport, and he was keen to get back to his car and actually do stuff with his Sunday, he was kind and accommodating. I couldn’t have asked for a better end to my trip than this: receiving an artwork from someone whose work I really bloody admire, who was also really nice about me being a complete numpty.

Seriously, I would give my right arm to share a pint and a chinwag with this guy. He’s just a freakin’ top bloke.

To be perfectly honest, I’ve really just put Taika here as a figurehead for all the beautiful people I had the pleasure of meeting through the What We Do In The Shadows premiere and in the hours (and days) afterwards, mostly because he’s the only one I got a photo with. Some other names that need dropping belong to Jemaine, Chris, Jackie, Theresa, Rhys, Vanessa, Mark, Daif, Nikkie and so many other brilliant, creative, kind, clever people who took a couple of minutes or more to chat to me, dance with me, be reasonably impressed by my trip or just cover the fact that they thought I was a bit of a twat. Whether it was the briefest of pleasantries, dancing around in an attempt to circumvent blocked doorways, dissections of Inter-Tasman media environments over wine, or barely decipherable conversations on disco-themed dance floors: every moment is treasured, and is going to stay with me until I shuffle off this mortal coil. (Even if you’ve already forgotten me. It’s okay: I’m particularly unmemorable.)

Of course, it is worth mentioning that not all the friends I made were of the human variety… But that’s a story for another time.

I really was completely and utterly blessed to have met these delightful folks on my trip, and I just want to remind the aforementioned awesome people (and those I’ve neglected to mention): there’s an open invitation for drinks at Smith’s Alternative or The Phoenix should you ever be in Canberra. (You showed me your town. I’d love to show you mine!)

Part of the reason why this post has taken so long is because I want to do these marvellous folks, and all the happy feelings they gave me, justice. Hopefully I’ve come relatively close to doing that.

tl;dr: Thanks dudes. You’re the best. Let’s go get a drink some time. x N